Jesus and the Process of Creation in the Qur’an

Judging by the number of verses and amount of details, the information given in the Qur’an about Jesus is extensive. I would venture to say that, as a Qur’anic figure he is portrayed with more comprehensiveness than any other.

It should be made clear that the Qur’an is not a historical or biographical work in a literal sense. In other words the information given about Jesus, for example, was given through Revelation, to the unlettered Muhammad, who without being an academic historian, corrected the position of J 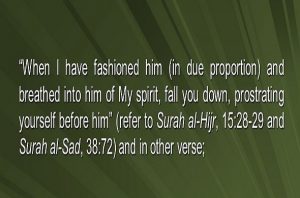 Because the making of Adam differs from that of the world, the process of his creation is recorded in great detail.

esus as previously understood, whether by Jews or Christians.

In the Qur’an there are five things which are given special concern, especially in terms of creation. God speaks of His creation of the world in ordered sequence whereas the other four areas are of central importance to the subject of this book; they are: Adam and his children, John the Baptist and Jesus himself.

Because the making of Adam differs from that of the world, the process of his creation is recorded in great detail in the Qur’an:

When I have fashioned him (in due proportion) and breathed into him of My spirit, fall you down in obeisance unto him. (Al-Hijr 15:29)

When I have fashioned him (in due proportion) and breathed into him of My spirit, fall you down in obeisance unto him. (Sad 38:72)

Moreover the making of Adam’s children shows another, different, process of creation from clay:

In this context we may refer to the making of Eve, who in Genesis (2:21-22) was formed of Adam’s rib; “So the Lord God caused the man to fall into a deep sleep; and while he was sleeping, he took one of the man’s ribs (a) and then closed up the place with flesh. Then the Lord God made a woman from the rib (b) he had taken out of the man, and he brought her to the man”, but in the Qur’an is created from a single soul of mankind:

O Mankind, fear your Lord who created you of a single soul, and from it created its mate, and from the pair of them scattered abroad many men and women. (An-Nisaa’ 4:1)

This brief survey of the creational process indicates clearly that the world was created out of nothing; Adam was created out of the world, Eve out of him and Adam’s offspring out of coition between Adam and Eve. It must be quite clear that all of these were created by God and God alone. Moreover it is explicit that all things were created by God and not out of God. I mention this because the Christian belief holds that, as in John, chapter I, verse 1, “the world was created through Jesus out of the word of God.” I mention this because it illustrates the power of God and the variety of creation.

Jesus Names in the Qur’an

In the Qur’an Jesus is called by name and is also designated the Messiah by attribute, son of Mary by human ascription, a servant of God by obedience, a prophet by the office of prophethood, a messenger by mission, a word of God by the way he was created and likewise a spirit from Him (God). Some Christians use these last two titles to support Jesus’ divinity. For example John of Damascus (c. 675-749), says that: But since you (Muslims) say Christ is the word of God and spirit how can you revile us …? If it (is outside God) the word then according to you, God is without a word and without mind.

Therefore while you avoid giving God a partner, you divine Him.( B. Kateregga and D. Shenk, Islam and Christianity) The author of this quotation while purporting to represent the Muslim view seems closer to a description of the Christian concept, and fails to understand the basic Islamic tenet that the word cannot be divided from God as I explain it in my forthcoming book: The Muslim View of Christianity.

Muhammad, the Qur’an, the Bible

I find it necessary to comment on this statement, but very briefly.

Rather, it seems to me that Shenk is saying if the Muslims are willing to say that Muhammad and the Qur’an accept the whole Bible and its claims as scripture, then Christians can accept the witness of Muhammad to the correctness of Christianity and need not denounce him.

This is still a propaganda play, but it doesn’t mean that Shenk necessarily thinks Muhammad or the Qur’an accept the whole Bible as scripture. Shenk said: “Muhammad accepts the total Biblical witness”, but this is completely erroneous. First this phrase shows Muhammad as one who can accept or reject in terms of his own humanity.

As a matter of fact the Revelation given to Muhammad recognizes some Biblical statements and by its very nature refutes others. In our view as Muslims Jesus was not the culmination of prophethood, but Muhammad, as he himself declared, was.

Source: The article is excerpted from the author’s book “The Qur’an and the Gospels: A Comparative Study.”