We need to make a distinction between mistakes stemming from an honest effort to find out what is right (ijtihad), and mistakes done deliberately, out of negligence or because of shortcomings. 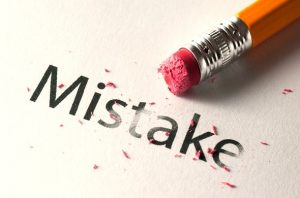 Ijtihad should be done on the part of one who is qualified, not one who gives fatwas without knowledge.

There is no doubt that in the first case, a person is not to be blamed; indeed he will earn one reward even if he is mistaken, so long as his intention was sincere and he tried to reach the right conclusion, because the Prophet (peace be upon him) said:

“If a ruler judges and strives to make the right decision, and his decision is correct, he will have two rewards, and if his decision is wrong, he will still have one reward.” (Al-Tirmidhi)

This is a different case from one who errs deliberately or because of shortcomings. In the first instance, the person should be taught and advised; in the second, he should be warned and rebuked.

The ijtihad which may be excused should be done on the part of one who is qualified, not one who gives fatwas without knowledge and without taking circumstances into account. This is why the Prophet severely denounced the people who made the mistake in the case of the man with the head wound. Abu Dawud narrated in his Sunan from Jabir (may Allah be pleased with him) who said:

“We went out on a Journey, and one of the men with us was struck in the head with a stone and started bleeding. Then he slept and when he woke up he needed to do ghusl (he was in state of janabah (impurity). He asked his companions, (Do you think I could get away with doing tayammum (dry ablution)?’ They said, (We don’t think you have any excuse because water is available.’ So he did ghusl, and he died. When we came to the Prophet (peace and blessings of Allah be upon him) and he was told about this, he said,(They have killed him, may Allah kill them! Why did they not ask if they did not know? The cure of the one who does not know is to ask…’” (Abu Dawud)

The third type is not regarded as having any excuse.

Another factor in gauging the degree of rebuking is paying attention to the environment in which the mistake occurred, such as whether it was an environment in which the Sunnah is followed or bid`ah is widespread, or how prevalent evil is, or whether there are ignorant or overly lenient people, whose opinions are widely followed, issuing fatwas to say that it is permissible.

A good intention on the part of the one who makes the mistake does not mean that he should not be rebuked.

`Amr ibn Yahya said: “I heard my father narrating from his father who said: ‘We were at the door of `Abdullaah ibn Mas`ud before the early morning prayer. When he came out we walked with him to the mosque. Abu Musa Al-Ash`ari came up to us and said, “Did Abu ‘Abd Al- Rahman come out to you yet?” We said, “No.” He sat down with us until (Abu `Abdur-Rahman) came out.

said, ‘What is this I see you doing?’ They said, ‘O Abu `Abdur-Rahman, these are pebbles we are using to count our takbir, tahlil and tasbeeh.’ He said, ‘Count your bad deeds, and I guarantee that nothing of your good deeds will be wasted. Woe to you, O Ummah of Muhammad, how quickly you are getting destroyed! The Companions of your Prophet (peace  be upon him) are still alive, his garment is not yet worn out and his vessels are not yet broken.

By the One in Whose hand is my soul, either you are following a way that is more guided than that of Muhammad or you have opened the door of misguidance!’ They said, ‘By Allah, O Abu `Abdur-Rahman, we only wanted to do good.’

He said, ‘How many of those who wanted to do good failed to achieve it! The Messenger of Allah told us that people recite Qur’an and it does not go any further than their throats. By Allah, I do not know, maybe most of them are people like you.’ Then he turned away from them.

`Amr ibn Salamah said, ‘I saw most of the members of those circles fighting alongside the Khawarij on the day of Nahrawan.’” (Ad-Darimi)

The article is an excerpt from the author’s book “The Prophet’s Methods for Correcting People’s Mistakes”.