The Style of Conversation: Its Effect on the Power of Speaking

Any form of communication can be employed in presenting Islam, from sign language and Braille to pamphlets and television. Here’s what matters most: the style of the conversation. 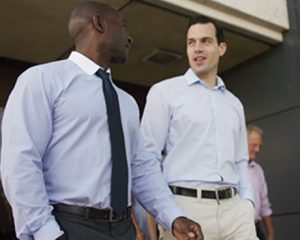 An effective way of reaching a person is when we talk ‘with’ them, and not ‘at’ them.

Below are outlined some of the various vehicles from which to choose in da`wah work:

The power of effective speaking is at the heart of da`wah. For the orator, as no book man has ever written, can instantly influence or change the behavior and thinking of others.

Indeed, the Messenger of Allah didn’t pass out pamphlets or beam satellite relays, he preached fiery sermons and called to people with his vibrant energy and charisma. He was a master speaker. People were moved to respond with great emotion and fervor. He comforted and eased those whom Allah wished to be guided and he enraged and angered the corrupt and the wicked. He didn’t mince words or need a script.

His words came from the natural talent and inspiration Allah bestowed upon him. And look at his results! Within one hundred years Muslims liberated most of the known world from ignorance.

This is why there is such a critical need for trained, experienced, eloquent and fluent speakers in the Muslim Ummah, both here and abroad.

But how does one acquire that devastating mastery over words that would enable him to storm the hearts and minds of others?

After being pure in conduct and content of heart, the following two ingredients might be useful to note in a conversation with anybody:

1- Be conscious of your body language. The French writer, Michel de Montaigne (d. 1592) once observed, “How often do the involuntary movements of our features reveal what we are secretly thinking and betray us to those about us!” Essays.

2- Fluency in the tongue of the people (if it is not your native language.) Spanish, French and English are the most widely used languages in North America.

3- Confidence: If you need improvement in your abilities as a speaker, attend a public speaking seminar. Dale Carnegie or Anthony Robbins seminars are widely available.

An effective way of reaching a person is when we talk ‘with’ them, and not ‘at’ them. Have you ever come into contact with someone who kept pushing something at you or who didn’t seem to care about what you had to say or how you felt? What sort of reaction did you have? You probably steeled yourself to anything they said and ignored their arguments.

This is the way some Muslims carry out da`wah, so it is important for a da`iah to be aware of this pitfall.

“…And I shouldn’t find you approaching a group of people who are busy with something else and then preaching to them. Instead, remain silent and when they ask you to speak, start unraveling your message, for then they will be ready for it.”

The Prophet (peace be upon him) was noted for a very respectful, humble style of conversation. He reasoned with people, not at them. He showed concern for their families, business and well-being, and he was always reserved, never unduly harsh or uncouth.

For further example, we read that Allah instructed His servant, Prophet Musa (peace be upon him), to go to Pharaoh and, “ …speak a gentle word to him that he might heed or fear”. (Ta-Ha 20:44)

We need to emulate this type of approach. In addition, a good rule to follow is to speak 20% of the time and listen the other 80%. Ask questions and evaluate responses. There is no greater pleasure for a person than to talk about him or herself and his or her concerns. It makes them open up and to become receptive to you as a person, as well as a Muslim.

View the sample dialogue below and pay particular attention to how our faith can be shared in a subtle, yet relevant way.

Ahmed was returning to his desk after lunch when he noticed one of his co-workers, Bob Smith, staring blankly at his pencil sharpener. The tension and worry were clearly visible in his face and he had not been very courteous to people for several days. Ahmed, heeding the advice of the Prophet Muhammad, may he be blessed, felt concern for the man and wandered over to his desk.

“You don’t sound too happy.”

“That’s some kind of title. What did he say?”

“Well, once he explained to some of his companions what life is really all about. He said, ‘The true success is one who surrenders his will to God, is provided with enough to live on and is made content by God for what He’s given him.’”

“That sounds about right,” intoned Bob cheerfully. “What else did he say about success?”

You can see where the conversation will be going now. Let’s analyze what we’ve done: we asked personal, reflective questions and made the person receptive to us. We’ve learned certain things about this person by his answers, such as, he is really proud of his life so far but seems to be struggling to remain thankful for what he has.

We’ve sparked his curiosity about Islam by strategically looking for an opening in his world-view where Islam could be introduced. And above all, we didn’t start right off with “religious talk.” That is something that must be eased or flowed into. Remember that.

To reiterate, many people are desperate for someone to listen to them. By asking respectful questions about them instead of lecturing you will both gain a new friend and learn how to approach them with the Message of truth and peace.

The article is an excerpt from the book How to Tell Others About Islam, 1994- Yahiya Emerick (a former President of the Islamic Foundation of North America, vice-principal at an Islamic school)